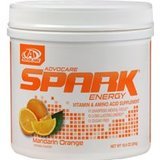 Sale Price: $61.00
AdvoCare Spark® is a unique multi-nutrient system that was developed as a nutritional source of energy and enhanced mental focus.* It’s sugar free with more than 20 vitamins, minerals and nutrients t… Read more…